(If you want to break a record that is published in a record book or governed by an international authorithy, there may be other or additional rules. See here for more information.)


The Record: One Mile, Team Of Two

The pair record  is 52:10 minutes by Edward Wynn and James Cullingham (Great Britain), set in Stradbroke, on 31 August 2002.
(This record has been broken by the solo record, see below)

The Story Behind the Record

We arranged an indoor attempt on the record: We used a varnished basketball court, on which the course had been laid out - the benefit being that the winks would travel about 5m horizontally before skidding to a stop. We had a relay effort where one
entrant in a team would rush to where the other member was targetting the wink.

This means the team members are effectively doing jumping jacks for an hour - kneeling to standing to running to a new position to kneeling again. This hurts, especially after the event - many of us had trouble standing for some days later.

We could just have done laps around the basketball court, but while this would have been faster, it also would have removed some of the skill and been deadly boring (it's about 16 laps). In the interests of making things interesting, I decided to use a space filling curve to define the course, which reduced it to just under 6 laps, and reduced the number of lappings.

As it happens, there was a catastrophe as the person laying out the court for us managed to chop off the right hand side during printing (it's a big image, so just hitting "print" won't work), without realising that the plan had an enormous gap at one end. We were there too late to re-lay out the course, so we just added a straight section and recalculated the distance (and, in retrospect, we found that in addition to being unable to use a printer, the person doing the layout also couldn't do maths - we overshot by a few metres). So it's all a bit haphazard.

Ralf Laue (Germany) covered a distance of 4.255 km while tiddlywinking at the fair "Model and Hobby" in Leipzig on  30 September 2005

The Record: One Mile, Solo Record

The Story Behind the First Record

I admit that I have a rather unusual hobby: to break world records (those that are published in the Guinness Book of Records.)
I am already the world record holder for pancake tossing, domino stacking, the largest fan of cards and much more.

When I got an invitation to the "Impossibility Challenger Games" (an event where record breakers from all over the world come
together and demonstrate their abilities), there was no doubt that I should agree to take part.

The only remaining question was which world record I would try to break on this occasion. Well, the best records for me are
those who bring a lot of fun for the record breakers as well as for the audience, so the "fastest tiddlywinks mile" seemed to
be a good choice.

The record published in the 2003 edition of the Guinness Book of Records reads as follows: "The fastest time for a tiddlywink
to be propelled over a measured mile is 2 hours, 25 minutes and 24 seconds by AGS Home Improvements Ltd of Newton Abbot, Devon, UK on November 20, 1999." Well, this seemed to be beatable, even if the current record was established by a team while I would like to start a solo attempt.

In order to get some information about the rules for such records, I e-mailed the ETwA, and Andrew Garrard was very helpful. The most important fact he told me was that the record had been broken in the meantime, and the new record breakers were Edward Wynn and James Cullingham with a time of 52:10 minutes. Well, 52 minutes sounds much faster than more than 2 hours, but on the other hand it would only be fair to accept my attempt as the inaugural record for the "fastest solo mile", because it is obviously much harder to squidge a wink over one mile alone.
(Andrew's e-mail included the warning that "many of us had trouble standing for some days later. Please bear this in mind
if you are considering a solo effort...") 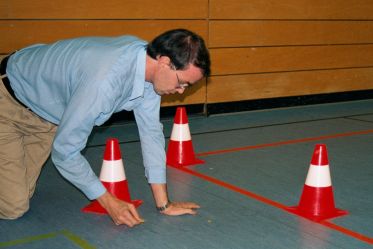 After some tiddlywinks training at home, I was sure that it would become a great event. The organisers of the "Impossibility Challenger Games" were already looking forward to my attempt, telling me that it would become one of the funniest (even if the other record breakers did their best as well - for example Ashrita Furman from the USA, the "world record holder for breaking Guinness world records", who balanced a milk bottle on his head for one mile).

I had the choice between an outdoor track and an indoor course on two basketball fields. Because of the cold weather, I decided to choose the indoor course. The referees had reserved a part of the court for me. (The rest of the court was used for other important activities like carrying 17 full beer steins over a given distance).

I was told that I had to cover a course 36 times. While the first laps were difficult for me (because of the hard surface), the lap times of between 3 and 5 minutes were okay. The most difficult points were at the end of each "lap" when I had to squidge the wink around three traffic cones which were arranged in a triangle.

But to be honest, tiddlywinks skill was much less important for this attempt than physical condition. Kneeling, running, kneeling again... It's harder than it seemed to be to the audience.
Luckily, I am a well-trained long-distance runner. But even after more than 20 finished marathon races, I've never had an experience like after one mile tiddlywinks - stiff muscles, but only in my right leg (because of the kneeling).
(So I can repeat Andrew's warning: a one-mile tiddlywinks attempt is nothing for untrained people.)

When I had done 18 laps (out of the 36 that I was supposed to have to go), the jury told me that my time so far was 1:06:01 hours. I still felt good for the second half.
However, after 20 laps they told me that they had just realised that I was already done - the mile was already over! (They had measured the course correctly, but in their calculation they had forgotten that in each lap, I had to go the distance back as well - so the correct number of laps was just 18!)

The best idea in such a situation is to mistrust the jury and to ask them to measure again and to recalculate at least twice. However, it was really true: I had already done my mile. But I did not want to stop until I had covered the 36 laps for a second mile.

However, after exactly 2016 meters (and after 1:23:40 h), the wink got lost under a movable wall that can be used to separate
the different parts of the sports centre. There was no way to get it back, and I felt that it would not be in the spirit of this record
category to replace the wink.

So I can now claim to be the record holder for the fastest solo tiddlywinks mile. Beat this!

The solo record for 2 miles is: 1:41:09 hours by Gabor Horváth (Hungary) at the Impossibility Challenger World Record Games in Dachau (Germany) on 6 November 2005.


Back to the World Record Homepage,
Back to "Members and Records"