Didi Senft has built more than 100 unusual bicycles. He successfully took part in a lot of festivals and TV shows. (Maybe you have seen him in TV as the devil of the Tour de France). With his collection of unusual bicycles, Didi was an attraction in many events around the world. 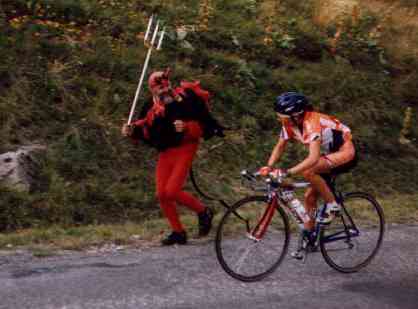 Didi, Le Diable:
Didi has always been a cycling enthusiast. In 1992, a dream came true: He visited the Tour de France for the first time, and he did so year by year. The most TV spectators know him as the "Devil of the Tour de France"

Back to the World Record Homepage,
Back to "Members and Records"