The Mental Calculation World Cup 2014 was held in Dresden on 10-12 October 2014 at Math Adventure Land and the University of Dresden. 39 calculators from 17 countries took part (selected from 74 persons from 21 countries who applied in the qualification).
The event started with a welcome reception where George Lane presented on a modular checking system for identifying errors in a calculation - and for correcting them. Willem Bouman was awarded a "Prix d'Excellence" for factorizing a number that is the product of three 3-digit primes (a famous challenge that has been solved by Zacharias Dase). And there was even a world record at the first evening: Wenzel Grüß (Germany) correctly factorized 20 randomly selected five-digit numbers in 10:03 minutes.
After taking part in the first part of the competition on Saturday, the participants had the opportunity to take part in a guided tour at Math Adventure Land. The day ended with a show event where the calculators had the possibility to show their best "tricks" to the museum visitors at Math Adventure Land.
On Sunday morning, part two of the competition was held. Before the award ceremony, the calculators got a guided tour at the MPS at Zwinger - one of world's finest collections of antique mathematical, physical and astronomical instruments.The award ceremony took place at Zwinger - the residency of the the former king of Saxony. 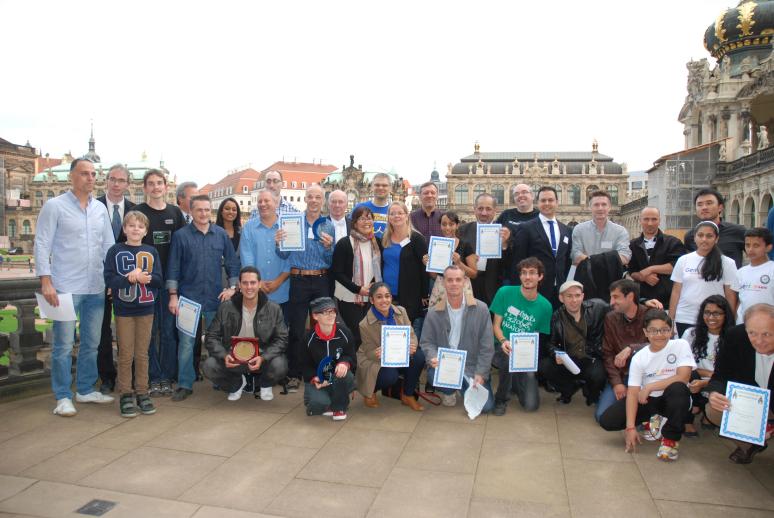 The world cup winner in the overall ranking was Granth Thakkar from India. Runner-up was Marc Jornet Sanz (Spain), followed by Chie Ishikawa (Japan).
Granth Thakkar also won the title in the category "Addition". His teammate Rhea Shah won the title in the "Square Roots" category. World cup winner for "Multiplicaiton" and "Calendar Calculation" is Marc Jornet Sanz. Andreas Berger (Germany) got the best score in the surprise tasks and won the "Most Versatile Calculator" contest. All the mentioned world cup winners won a trip to Las Vegas for Memoriad 2016.


Contacts:
If you have any questions on the MCWC, please contact info@recordholders.org.
The best place for discussions about the World Cup and mental calculation in general is the Mental Calculation Mailing List.