Parts of this list are based on a web site by John Smith.
Corrections and information about new records are welcome; please e-mail to info@recordholders.org.

The largest crane folded from a single sheet of paper had a wingspan of  7.1 meters. It was folded by students in Jim Mockford's Japanese class at Camas High School (USA) from a piece of paper that was about 2 sq meters [23 sq ft]
The crane was sent to Camas' sister school - Seirei Gakuen High School in Hamamatsu, Japan 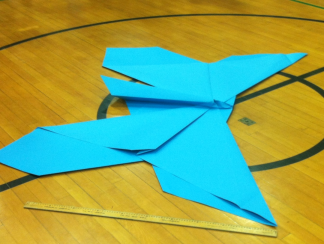 Paul Jackson, in November, 1980 at the University College, London, successfully folded and banged the classic model made from a paper rectangle 108 ins. by 66 ins.
(source: BOS magazine no. 86, pages 14 and 15)

(previous record: A team of six from the MJC Maison-Blanche, Reims, France folded a 2.6 metre tall owl from a sheet of paper of 16 square metres.)
(source: Guinness Book of Records French edition 1990)

The longest construction made from folded paper is a gum wrapper chain by Gary Duschl. It contains more than one million gum wrappers and is more than 14 km [more than 9 miles] long. Details can be found at www.gumwrapper.com.

An origami Brachiosaurus was folded from a paper measuring 10 m x 10 m  on 11 November 2018 by group of 15 people at the  HonarShahreAftab lobby in Sun Art City, Shiraz, Iran. The model with a height of 5 metres took 15 hours to get finished. The origami dinosaur measured 8 metres from tail to head. (see photo). 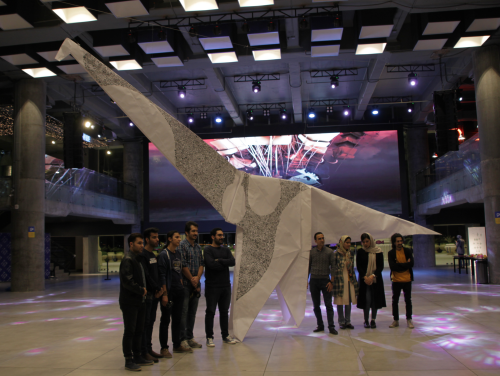 The longest paper spring was constructed by a team of five girls ( Sara, Jasmine, Mariam, Addia and Salia ) at Burntwood School, London, UK in March 2020. It measured 250 m.

A train of 1,550 wagons, 254 m long, was made at the National Railway Museum in York (GBR) in 2003. Origami enthusiasts from all over the world sent in paper wagons to take part in this record attempt.
(source: BBC news)

Lluis Valldeneu i Bigas, a Spanish watch maker, has folded a pajarita from paper measuring 0.36 millimetres by 0.3 millimetres using a 20 times magnification lens, and two pairs of tweezers! The pajarita is about as large as a full-stop!

A square 1 mm by 1 mm was used to fold a crane using a microscope and sewing needle by Assistant Professor Watanabe at Nigata University, Japan.
(source: British Origami, No. 119, page 22)

A. Naito, Japan, folded a flapping bird from paper a mere 2.9 mm (about 1/10 in) square in response to a 'smallest flapping bird competition' the bird was only about 2 mm from beak to tail. To display it, Naito mounted it on a needle inside a transparent globe. However it was still very difficult to see so Nigel Keen fitted a contact lens to the outside of the globe through which it could be viewed.
(source: page 160 of Complete Origami by Eric Kenneway)

A flower with a diameter of 3.2 millimetres folded by Christophe Brault, France was shown on the Festival des Records in Beslon, France, July 1986.
(source: Guinness Book of Records, French edition 1990)

A Kawasaki rose as found in Origami for the Connoisseur with a diameter of approximately 3 millimetres was folded by Joseph Wu. This may have since been superseded by Winson Chan, against whom he is competing in an ongoing smallest rose competition

Peter Koppen, a Munich bus driver folds the classic boat (like a hat) only. He calls them Microships and folds hundreds of them in different colours and then assembles them into collages. He has been reported as having folded over two hundred thousand (200,000) of them.

In September 1980, 13-year-old Markin Kunz of Germany folded 13,131 paper boats in 432 working hours at a swimming pool in Landau in September 1980. To qualify the boats have to be actually set on water at the same venue.
(source: Aktuelle Quatsch-Rekorde 1980) 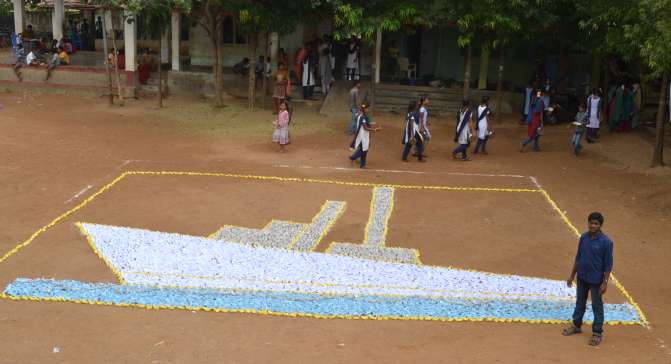 1,274,808 paper cranes were folded and sent to the Shin Min Record Breaking Carnival held from 11 to 13 March at Suntec City, Singapore. The event was organized by Shin Min Daily News and Song He Fragrant Rice.
(source: Singapore Book of Records 2007)

To commemorate the fiftieth anniversary of the dropping of the atomic bomb on Hiroshima, two hundred thousand folded paper cranes were completed by December 15th 1995. Each crane had someone's name and peace message written on it. The intention is to preserve them to hand on to the 21st century. The event was sponsored by the Hiroshima International Cultural Foundation.

Whipsnade Zoo in Luton (Great Britain) displayed 33,764 paper elephants which have been sent from supporters around the world at its Elephantastic weekend on 20/21 September 2014. 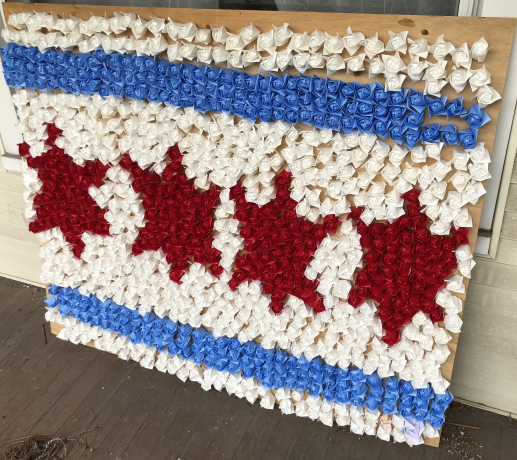 Johnny Hollowed (USA) built a display of 900 Kawasaki roses in the pattern of the Chicago flag (see photo). The display has been completed on 22 May 2020 and was done to show the resilience of Chicago amidst Covid-19 lockdown.

Yoneyama Yuichi (Japan) folded 100 origami cranes in 40:35 minutes on 30 November 2010 in Nagoya, Japan.
previous records:
Marten Brouwer (Manna Ori) (Netherlands) folded 100 paper cranes in 54:30 minutes on 18 August 2010 in the Paper Crane Interactive Exhibition Room of the former Hiroshima Minicipal Baseball Stadium in Hiroshima City, Japan.
Hiromi Ashlin (Australia) folded 100 cranes in 1:14:25 hr at the Wish upon a Crane challenge at the Abacus Labs, Curtin University, Perth, Australia on 12 October 2007. She won the speed folding contest. Keiko Kokufu was with a time of 1:22:10 hrs closely behind her, but still broke the old record of Akie Morita (Japan) (1:38:36 hours on 23 October 2004 at Bukyo Gakuin University in Saitana).

Most Paper Cranes in One Hour (Team)

Jeannine Mosely USA, completed a level 2 Sierpinksi sponge in December 1995, with 2400 identical modules. It took about 15 hours total to construct, and over a period of about 2 weeks, working on it for 2 to 3 hours at a time, every couple of days.

Largest Number of Units in a Modular Origami

900 Sonobe units assembled into a "sphere" by the students of the Ikeda Institute in Osaka. See Origami for the Connoisseur by Kunihiko Kasahara. Reported by Valerie Vann.

Lluis Valldeneu i Bigas of Spain has made a cat's face from 10,375 modules.
source: BOS magazine, October 1996.

Model With the Most Steps/Folds

Note: following advice from Hans Birkland and Robert Lang, I have given up just counting the number of steps or diagrams, which as Robert points out is likely to be dependent on the authors use of a computer which makes it easier to produce diagrams. Instead I have counted the total number of folds needed, so the total I have given is the number of mountain/valley folds, plus the number of reverse folds, plus the number of squashes and so on. But a reverse fold requires the manipulation of 4 creases simultaneously, and a squash is a reverse fold plus a valley fold so requires 5 folds, and a sink of many layers can require the manipulation of 10 or more creases and so on. An approximate estimate I have made suggests that, if half of the folds are valley/mountain (equals one crease) and on average the other half require the manipulation of 5 creases, then the average per fold is 3 creases.)


Longest Jump by an Origami Frog

Lisa Hodson, USA, reported that, under controlled conditions (a flat surface of paper over hard wood floor and no draft), a leap of 74.7 cm was achieved by a variation of the American Jumping Frog by Kennedy published in a FOCA annual (1992?). The frog was folded out of a 15 cm square of white photocopy paper with the grain of the paper from top to bottom at step 1 of folding (the length of folded frog was approximately 5.5 cm). Lisa did not record the date, but it was in April, 1994. Excluding this jump, this particular frog had a mean jump length of about 30 cm. Lisa scientifically demonstrated that for this particular frog model folded out of photocopy paper, the orientation of the paper grain does not significantly affect jump length.

At Christmas 2001, an 18 m tall Christmas tree in the Megastores Shopping Mall in Den Haag (Netherlands) was covered with 10,000 origami decorations. DETAILS AND PHOTOS


Folding a Sheet of Paper in Half


In 2002, Britney Gallivan (USA) demonstrated that a single piece of paper can be folded in half twelve times, known as the paper folding problem in Mathematics. [DETAILS].
On 2 April 2011 and once again on 5 December 2011, a group of  students and teacher James Tanton from St. Mark's School in Southborough (USA)  created a stable object that was physically a 13-folded single strip of paper. However, only the last seven folds were constructed by physically lifting the paper from right to left while the first six "folds" have been achieved by taping strips of paper together [VIDEO].


The Greatest Weight that can be Transported by a Paper Boat

(Well, this is not really Origami,adhesive is allowed, but a cool contest anyway). The records can be found at www.paperboat.de.


Back to the World Record Homepage